Add some zen to your day in Nanjing

Where are all the Chinese millennials going for urban enlightenment? In Nanjing and beyond, a burgeoning array of sites and services offer connections to the calmer, healthier, more spiritual side of Chinese life.

In the close heat of a July morning in Nanjing, Wang Lei lights a supersized, ochre-coloured incense stick and bends towards the shiny new dome of the Usnisa Palace’s Thousand-Buddha Hall.

Wang is not your typical Buddhist practitioner. Until recently, the 28-year-old had barely set foot in a temple and was far more interested in gaming and online shopping than religion.

These days Wang visits the Usnisa Palace and other Buddhist temples in Nanjing as often as he can. Sometimes he joins classes in meditation and Buddhist teaching.

“Now I live not only to better myself, but to help other people, too. Through meditation I have found inner peace,” he says.

Wang’s story is far from unusual. If the old saying “money doesn’t buy happiness,” seems trite, then these days, more young Chinese are interested in finding something that can. And as the search for real meaning intensifies, so too does the number of sites and services catering to their desires.

Wholesome cuisine at the Sangha Retreat.

Meditation at the Sangha Retreat (with Chongyuan Temple in the background).

“I see a lot of young Chinese turning their back on consumerism these days,” he says. “Whether it be nature, or spirituality, or health and wellbeing, they are choosing to focus on other things. I think that’s healthy and a sign of a maturing society.”

Complementing Niushoushan is another similarly arresting, multimillion-dollar Nanjing-based Buddhist attraction: the Porcelain Tower. Situated in downtown Nanjing on the south bank of the Qinhuai River, enclosed by the Porcelain Tower Heritage Park, the 108-metre-high structure has quickly become one of the city’s foremost architectural icons. 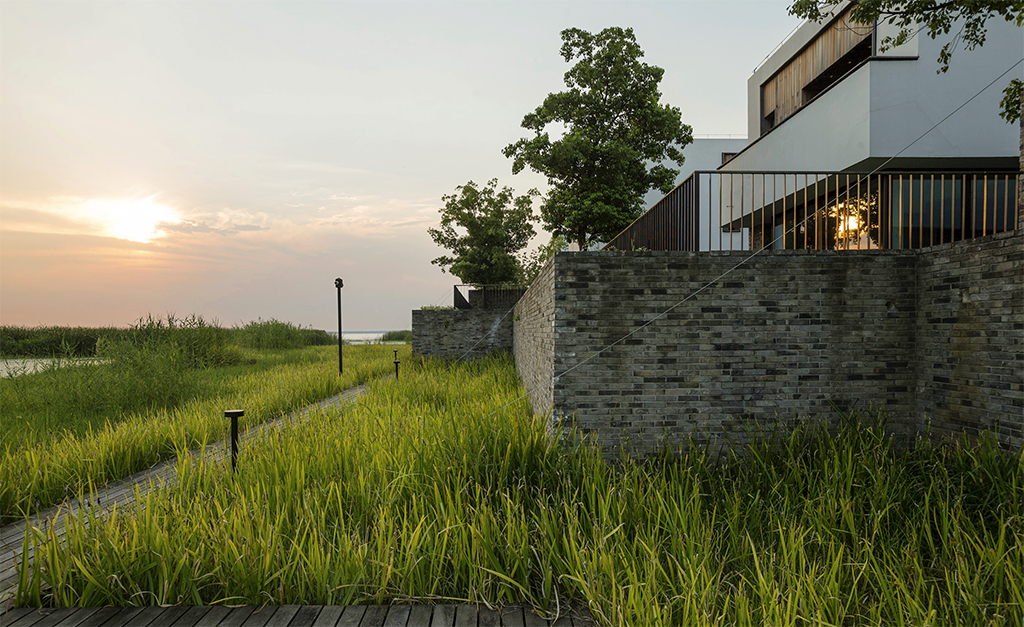 Community living at the Sangha Retreat.

The decidedly high-tech Porcelain Tower, constructed from steel and glass, is not the first of its kind to grace Nanjing. Made with glittering porcelain bricks and widely considered the most exquisite pagoda in China, the original tower was destroyed during the Taiping Rebellion in the 19th century. Its modern replacement now forms the backdrop for some spectacular al fresco music and dance performances and is surrounded by some equally modern museums and galleries.

Yet for those prepared to venture farther afield, other sanctuaries of wellness and spirituality await.

As the late afternoon sun dips towards the horizon, the surface of Yangcheng Lake is transformed into a golden mirror, with long stretches of shimmering water reflecting the reedbed islets above with perfect clarity.

On a wooden platform beside the lake, yoga instructor Amanda Xu practices crescent moons, her conjoined hands reaching up into the fiery sky. Here, about a 30-minute drive from the traffic jams and wall-to-wall neon of downtown Suzhou (and 90 minutes by high-speed train from Nanjing), life is slow, tranquil, and decidedly more organic. The multi-storey silhouette of Chongyuan Temple, visible across the water, adds to the zen-like ambience.

Yangcheng Lake, a body of fresh water located between the far larger Lake Tai and the mighty Yangtze River is slowly becoming a place for local Chinese to escape the rigours of urban life, nurture their health and wellness, and generally pamper themselves.

Many young Chinese choose to focus on nature, spirituality, or wellbeing instead of consumerism.

The location for such spiritual and physical rejuvenation is the recently opened Sangha Retreat, a “holistic wellness sanctuary” by Octave that extends across nearly 19 hectares of prime, beautifully landscaped lakeside property. Designed by Tsao & McKown Architects from New York, Sangha – the Sanskrit word for “community” – is envisioned as a health and wellness hub that includes both permanent homes and a seemingly never-ending array of on-site treatments and facilities.

“Sangha’s rationale is to treat wellness holistically,” explains Katherine Wong, the Sangha Retreat general manager. “We start by raising awareness in our guests, and then go on to teach them different practices so that they can sustain their health and wellness long term.” 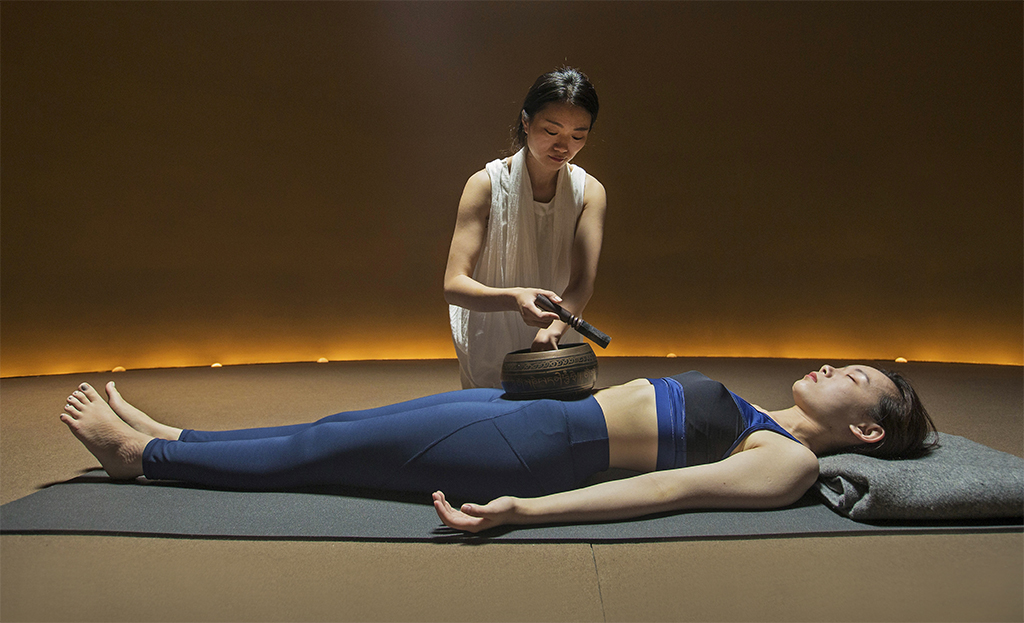 Gong meditation at the Sangha Retreat.

To call Sangha a retreat is something of an understatement – this is a watery wellness wonderland on a scale that has never been seen before in China. In addition to the 109 houses, four apartment buildings, various restaurants, and other guest accommodation, facilities, and services include a deluxe spa, meditation and gong baths, massages, yoga, hydrotherapy, an array of beauty treatments, and a stunning outdoor pool. The chic, minimalistic design, which places Mother Nature centre stage, riffs respectfully on Taoist principles.

This is a watery wellness wonderland on a scale that has never been seen before in China.

“Our location in China, which is where the great living philosophy and practice of traditional Chinese medicine (TCM) originates, helps us offer the highest quality treatments,” says Sangha’s Wong. “We are able to access the finest TCM talent, materials, and ingredients. TCM is still a living healing system, and we can integrate the latest research into Western healing therapies.”

Sangha is not Octave’s only ­Chinese offering. The company’s Shanghai-based Living Room is one of China’s first comprehensive urban wellness centres, offering classes in yoga, boxing and fitness, as well as a popular organic restaurant.

“The demand for wellness retreats here is huge,” says Wong. “China is rapidly becoming a first world country, with all the stresses and strains of the developed world. The next step is for China to grow beyond its appetite for material things and discover our true need to live life harmoniously with each other and the environment.”

Discover Shanghai’s urban sanctuaries
Time travel to Dalifornia
Where Shanghai’s eco-conscious go to get away
Surprising Beijing: past present
Past forward in Nanjing
Where architecture meets heritage in China