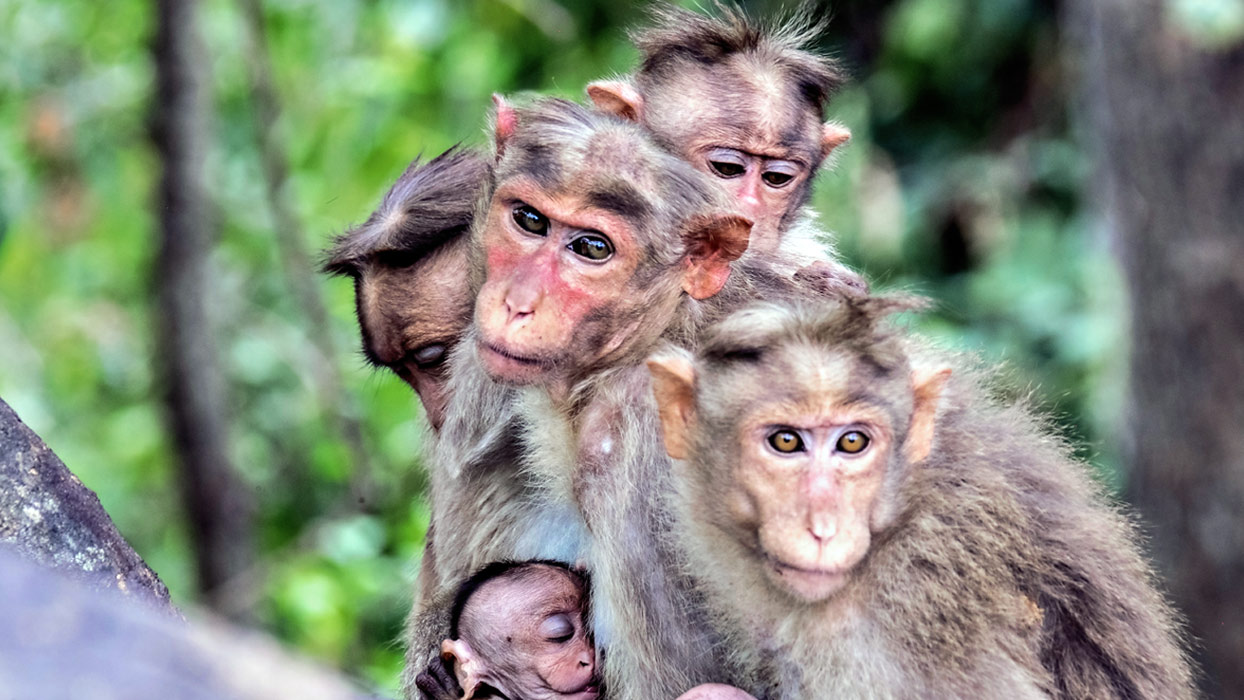 Wild elephants, giant squirrels, sambar deer, and monkeys are among the menagerie you can encounter when exploring the parks and wildlife sanctuaries of India’s southernmost state.

There is a commotion on the road about 20 kilometres from the town of Munnar in the Indian state of Kerala. Cars are parked along a bend overlooking a slope leading down to the jungle. Boys are pointing at the trees and honking buses creep past so their passengers can get a view of what’s causing all the fuss. Even in Kerala, where estimates of this animal’s population vary from between 3,000 and 6,000, the sight of an Indian wild elephant stirs up excitement.

There are road signs warn of elephants crossing and of penalties for poachers, but residents are not too worried about the damage an elephant might do to a plantation of waist-high tea bushes. After all, Munnar, a former British hill station, wrapped in mist at dawn and framed in frequent crimson sunsets, is the centre of Kerala’s tea production.

Tea plantations dominate the landscape. It’s as if millions of green velvet cushions had been individually arranged in a meticulously patterned carpet, draped across the hills. But on the higher reaches of the mountains and in clusters of jungle and rugged bush in the valleys, an enthralling variety of wildlife remains, of which the wild Asian elephant is only the most conspicuous example.

Goat of the Ghats

Not far from the tea and spice stores lining Munnar’s streets is the entrance to the Eravikulam National Park, covering 100 square kilometres of the ­soaring Western Ghats, the range that spans the border between Kerala and its neighbouring state, Tamil Nadu. Buses ferry visitors up the slopes of the Ghats, with the last kilometre of the road covered on foot, a short expedition rewarded with fabulous panoramas across the valley and hills to the west.

The highest mountain in India south of the Himalayas, all 2,650 metres of it, looms above ­Eravikulam. This is Anamudi, meaning “elephant’s forehead,” and elephants inhabit the upland pastures and scrub, along with macaques and langurs, sloth bears, sambar deer, leopards, the very occasional tiger, and the cheerlessly-named grizzled Indian giant squirrel, as well as 133 species of birds.

Yet the most likely encounter is with the park’s iconic creature, the endangered Nilgiri Tahr, a gentle and unassuming species of mountain goat that ventures down to the scrubland on either side of the visitors’ trail. In addition to the Nilgiri Tahr, another attraction is the highly infrequent – once every 12 years, in fact – but spectacular blooming of the vivid blue Kurinji flower. The next display will not be until 2018.

Blooming more regularly are the flame trees that provide shade for the plantation workers as the road heads north to, then passes through, the Chinnar Wildlife Sanctuary, directly on the border with Tamil Nadu and adjoining the Indira Gandhi National Park. Craggy hills and forested valleys shelter grizzled giant squirrels, tufted grey langurs, sambar and spotted deer, elephant, leopards, and gaur (known locally as bison). Log houses, tree houses, and trekking huts are available for more intrepid visitors in the company of guides and cooks.

Tigers at a premium

The five-hour road trip south from Munnar plunges through expanses of tea plantations before descending to pineapple and cardamom estates. At the end of this drive, just beyond the regional ­cardamom capital of Kumily, lies the entrance to the Periyar Tiger Reserve at Thekaddy. In spite of its name, and because it is the biggest tiger reserve in India, the chances are slight of spotting one of the 50 creatures whose name it bears that live here. But there are ample other wildlife rewards.

Periyar is popular with day-trippers who head straight for the quay on the reservoir, from which a constant flotilla of boats embarks. An hour’s cruise around the water often yields views of grazing gaur or bison, as well as handsome sambar deer and even, as dusk approaches, herds of bathing elephants. Bird-spotters will appreciate the variety of winged attractions here too, from cormorants and herons to painted storks and lapwings.

The secluded Kerala government-run Lake Palace hotel, tucked away on a forested island, offers the best viewing prospects, while the grounds around the 1930s “heritage” hotel, Ananya Nivas, provide close evening encounters with some very bold monkeys, wild boar, and the chocolate-brown and black Malabar giant squirrel. The latter grows to up to a metre in length, hanging head-down to feed on fruit, and is easily spotted in and around Periyar.

Accessible and well-served with amenities, Thekaddy can get a little overrun with visiting tourist groups, and a quieter adventure option awaits in the forests around the ­village of Gavi, site of an eco-tourism camp and information centre, about an hour’s jeep drive away. Patience, hush, and observance may be rewarded with sightings of elephants patrolling the hilltops, of black long-tailed Nilgiri langurs snarling from the trees, and of Malabar squirrels snoozing in morning sunlight.

A Malabar giant squirrel in the forest at Gavi

Tiger sightings in the area that is set aside as their reserve, on the other hand, are extremely rare. “I have to admit that I have never seen a tiger here,” says Kerala Forest Department eco-tourism guide Jegan. He gestures across the vast canopy of the jungle from a hilltop vantage point reached by means of a special permit granted by the tribal villagers who reside here. “The animals have lots of room. They’re very sensible. They know it’s wise to be careful of people, so they move around at night,” he says.

The visit continues with a rowing boat ride on the river near the Green Mansion at Kochu Pampa. ­Common and brown-breasted kingfishers dart across the water, a cormorant spreads its wings on a rock, and serpents and black eagles swoop over the boat. Jegan points up at what looks like a white sponge in the treetops: a flying ants’ nest, he explains, home to an extremely venomous insect. On the subject of venom, he adds, the cobra is as common here as it is over most of India.

On the road back to Kochi on Kerala’s coast, an icon of Ganesh, the Hindu elephant god, the remover of obstacles on journeys, sits on the dashboard while its wild cousin continues its unfettered stomp through the Kerala jungle.

A brown fish owl at Thattekad

Finnair flies regularly to Delhi from which many domestic flights operate to Cochin, probably the best entry point for wildlife watchers. Kerala is India’s most southerly state so ­reaching it by train from Delhi, though possible, takes the best part of two days.

Finnair flies regularly to Delhi from which many domestic flights operate to Cochin, probably the best entry point for wildlife watchers. Kerala is India’s most southerly state so ­reaching it by train from Delhi, though possible, takes the best part of two days.