We visit Stockholm to see how locals embrace urban nature.

The city of Stockholm stretches across 14 islands and is known for its hip cafés, boutiques, and museums. Yet alongside its healthy dose of arts and culture, the capital teems with accessible outdoorsy options.

There’s no better ambassador for the active lifestyle than David Kvart. The Stockholm native is a TV producer and director, and co-founder of Fejan Outdoor, a kayak and outdoor centre in the Swedish Archipelago about 100 kilometres from Stockholm.

“One the best features of Stockholm is that it’s really made for enjoying the outdoors, for walking, running, cycling, and kayaking. Here you have one of the outdoor utegyms, which is a good example of what you can do in the city,” says Kvart, gesturing to an array of all-weather exercise equipment fashioned from wooden logs.

No Swedish person thinks it’s a big deal to go outdoors – whatever the weather.

Eriksdal utegym was the city’s first utegym, founded in 2009. The concept has gone on to flourish and now there are 38 outdoor gyms in the capital.

It embodies friluftsliv – open-air living – and to a certain extent another Nordic idea, the freedom to roam (allmansrätten), which is the general public’s right to access public or privately-owned land for recreation or exercise.

“Friluftsliv is accessible to everyone, with lots of large nature areas and parks in the city,” says Kvart. “It’s in our DNA, no Swedish person thinks it’s a big deal to go outdoors – whatever the weather.”

Three years ago Kvart survived a life-threatening electrical accident in the archipelago. “It made me realise that I was spending a lot of time indoors longing to be outdoors,” he says.

Eriksdal utegym Take the subway to Skanstul T-bana subway station and then walk for about 3 minutes downhill towards the water.

Rooftop tours Takvandring Rooftop Tours are available on request, and regular tours are scheduled during the summer months.

Glamping in the Swedish Archipelago at Fejan Outdoor’s Canvas Hotel

Stockholm native David Kvart, a TV producer and director, is the co-founder of Fejan Outdoor.

So he took the leap and co-founded Fejan Outdoor, which was initially focused on guiding kayaking tours. In 2016, it was complemented with the Canvas Hotel, a stylish example of “glamping,” a portmanteau of glamour + camping.

“At the time, I didn’t even know glamping was a thing. I just decided that we should have hotel quality beds with luxury sheets inside the canvas tents as that would be a cool thing to do,” he says.

Fejan doubles as an Instagrammer’s dream, with all the cosy elements that create serenity.

In addition to the striking natural surroundings of water and woods, Fejan doubles as an Instagrammer’s dream, with picturesque wooden docks, small wood-fired stoves for cold nights, oil lanterns, and all the cosy elements that create serenity in the northern archipelago.

This path leads to the refreshing waters of the Archipelago.

Open-air living at its best: catching the morning sun over breakfast.

Fejan, located outside Gräddö, the less crowded part of the archipelago, is “a bit like Lapland offering quiet, piece of mind. It is Stockholm’s closest wilderness,” he says.

Takvandring Rooftop Tours started 11 years ago in the eastern Swedish city of Sundsvall and expanded to Stockholm, where it offers guided rooftop walking tours atop a historic building with views over the city.

“We wanted to offer a totally new way to experience Stockholm,” says Robin Ringqvist, our Takvandring guide, who is also second in command at the company. Indeed, 43 metres above the city qualifies as novel and quite friluftsliv.

The excursion starts at street level, at Birger Jarls Torg 5 on Riddarholmen, a significant address: The city was founded in 1252 by Swedish statesman Birger Jarl and the building once housed Sweden’s first parliament. Today it’s Stockholm’s administrative court. 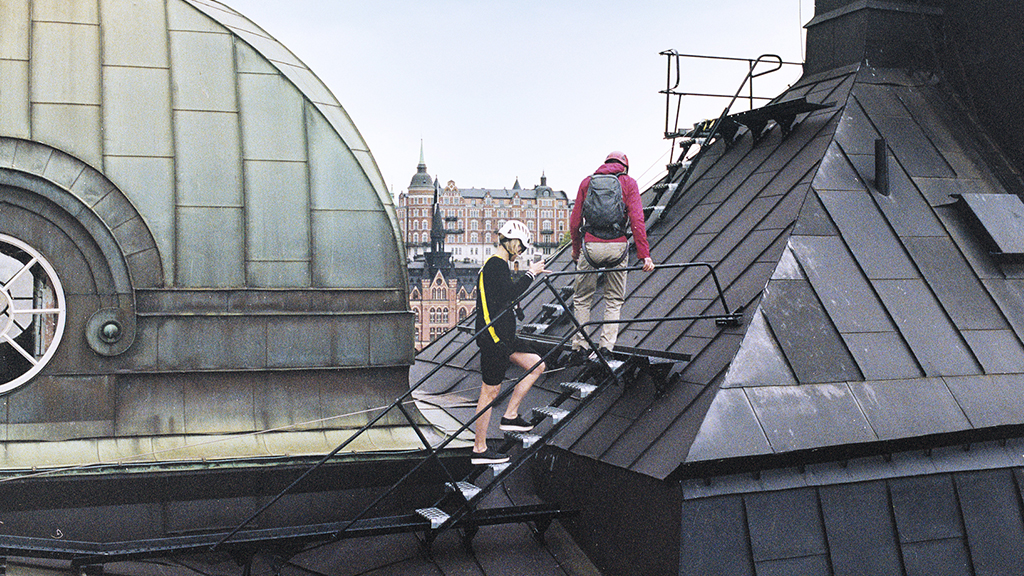 Rooftop hiking offers a novel way to view the city.

We head up through the building to the top floor attic space, where a set of colourful safety harnesses and helmets line the hooks along the wall.

Kitted out, we climb up the narrow wooden stairs, seemingly up into the sky. Once out in the fresh air on the rooftop, our harnesses are hooked into cables that run along the narrow catwalks for safety.

Following Ringqvist, the reward is a stunning 360-degree view over the city that navigates the building’s rooftop, while our guide provides a fact-filled tour of what’s on view at each turn.

As we carefully walk forward, there are great photo opportunities out over the wooded Långholmen Island, which was Stockholm’s royal prison in the 18th and 19th centuries before it was shuttered. The green space opened to visitors in 1975 and features one of the best spots to rent a kayak.

Back down at ground level, another of Stockholm’s unique friluftsliv charms is that the capital boasts seawater clean enough to swim in and is peppered with dozens of city swimming beaches and docks.

A favourite with locals, Hornsbergs strand lies close to the city centre. On the long boardwalk adjacent to modern blocks of flats are several spots to take a refreshing dip, either off the pier or by climbing down a ladder into the brackish and refreshing Baltic Sea. 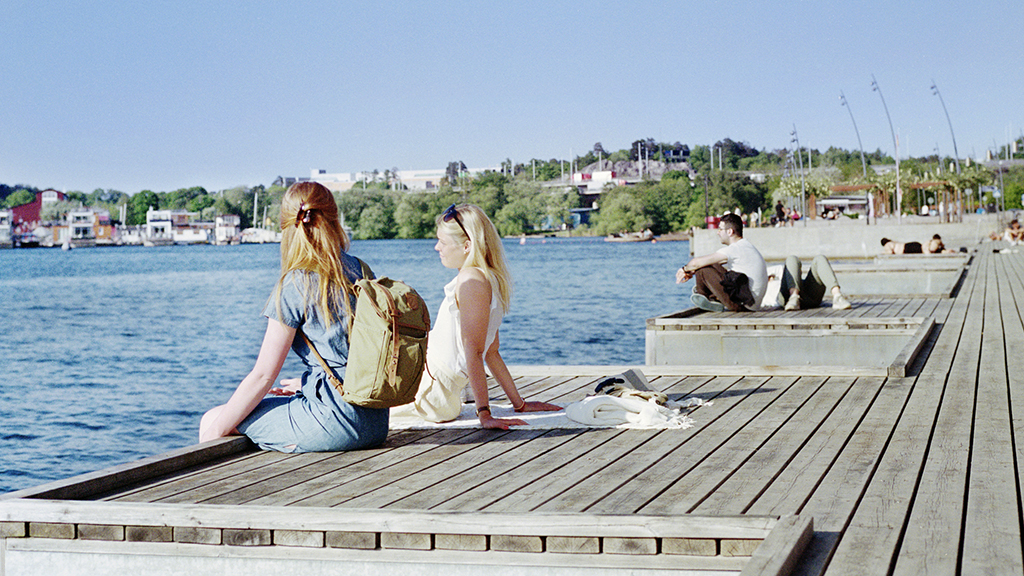 On a sunny day, Stockholmers Elin Joelsson and Rebecka Ellis are enjoying the warm weather at Hornsbergs strand.

Fans of Hornsbergs strand, they recommend it for people of all ages from families to couples and singles.

“Generally, the water around Stockholm is very clean so wherever there’s a ladder down into the water we can recommend it for a swim. Some nice spots include Vinterviken, just south of Stockholm, and Långholmen,” says Ellis.

As for the concept of friluftsliv, the duo says that it goes hand-in-hand with urban swimming, as one of its main points is to be outdoors connected to nature. “It’s just a natural part of daily life living in Stockholm,” says Joelsson.

Eriksdal utegym Take the subway to Skanstul T-bana subway station and then walk for about 3 minutes downhill towards the water.

Rooftop tours Takvandring Rooftop Tours are available on request, and regular tours are scheduled during the summer months.

Discover the understatedly hip Gothenburg
Vegan travel in Stockholm: yes, you too can fika
Four offbeat things to do in Stockholm
How to spa like a Swede
Life’s a beach: living the coastal life in V...