From the Baltic Sea to Lapland, a new breed of imaginative accommodations offers a chance to get closer to Finnish nature all the while lodging in comfort.

Perhaps Finland’s greatest asset is its abundance of unspoiled nature. Throughout the entire country there are countless spots to pitch a tent and during the warm summer nights camping is an economical option especially for the more adventurous backpacker or bikepacker. But once the weather cools down tenting is strictly for the well-equipped enthusiast only. Glamping-type alternatives expand the possibilities during any season of the year.

Glamping, a portmanteau of glamorous and camping, started more than a decade ago in the UK. Glamping has developed over the years and there are now options that are somewhere between a backpacking tent and a fancy hotel which offer greater comfort, even luxury, but don’t interfere with the nature experience.

On the coast of Helsinki, the island of Vallisaari is one of the newest marine destinations within the capital. In 2018, the state administrator, Metsähallitus, allowed the first overnight accommodation, a simple wooden A-frame structure planned by local designer Robin Falck, who calls his striking design Nolla which means zero in Finnish. It’s a clever structure which is easy to construct and assemble and designed to be sustainable and zero waste. “You can put it up in a day,” Falck says. “You can take any standard plywood sheets and build your own.”

In summer 2018, in cooperation with the Finnish oil refiner Neste, Falck also set up a Nolla cabin on Kuninkaansaari, a small island attached to Vallisaari. Nestled on a secluded granite shoreline with views of the open sea, the cabin was available on Airbnb and sold out immediately. Equipped with solar panels on the large slopping roof, a small Wallas combination heater and cooker using Neste’s recycled diesel, and two twin-sized beds, Nolla is a comfortable alternative to a tent. 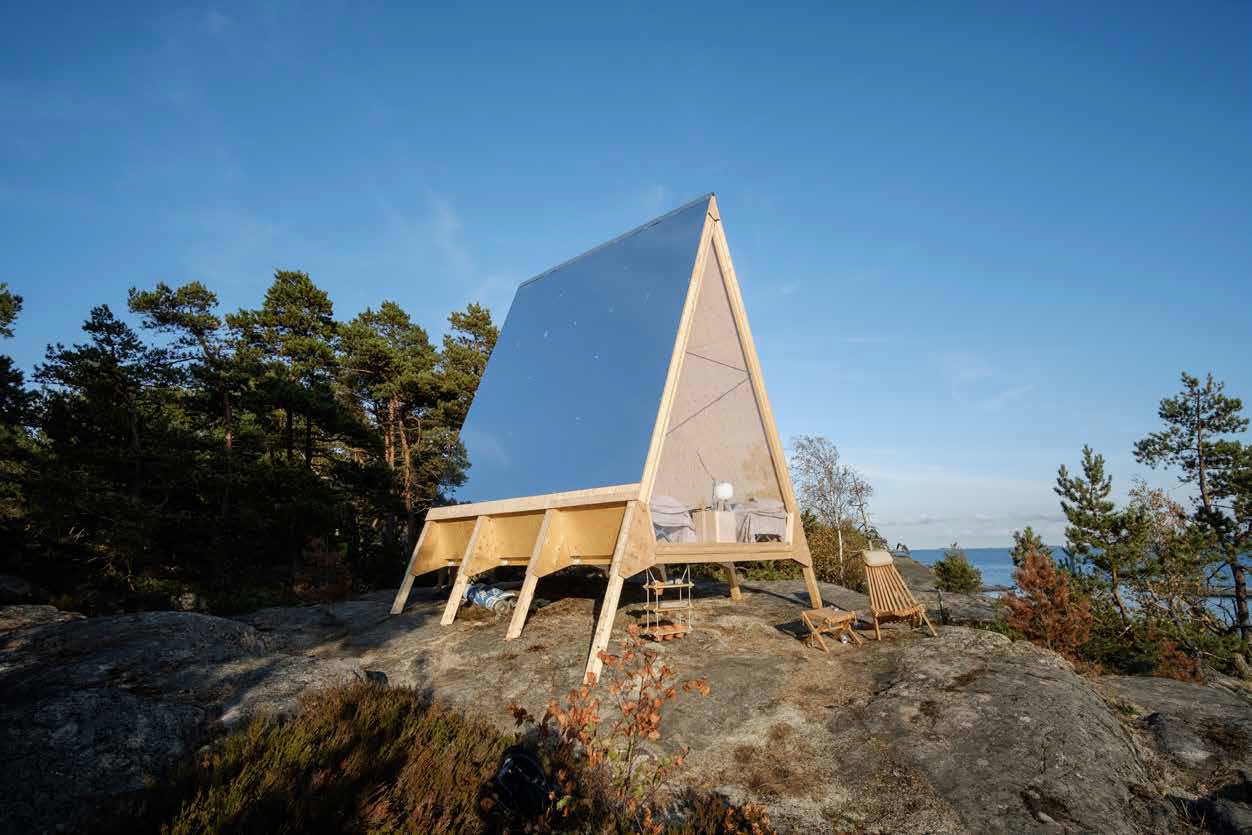 Designer Robin Falck’s Nolla A-frame cabin made its debut on the Helsinki island of Kuninkaansaari.

Another curious alternative to a traditional campsite is the Eco-Camp in Nuuksio National Park in Espoo, about an hour’s journey of Helsinki. Set up by Markku Janhonen and his company Honkalintu in 2018, the Eco-Camp’s specialty are tents suspended several metres above the forest floor.

Sleeping in a hanging tent takes a little getting used to, but the view of the night sky through the treetops and the sound of a slight breeze through the branches creates an amazing nature experience.

“The tentsile can hold 400 kilos, so it’s very safe,” says Janhonen. And the floor is taunt and level but a bit springy which makes for a firm, comfortable bed.

“I felt like a child who gets to sleep in their treehouse overnight,” says Anna Greenwood, a visitor from the UK who spent a couple of nights in one of the hammock tents at the Tentsile Experience Eco-Camp Nuuksio. 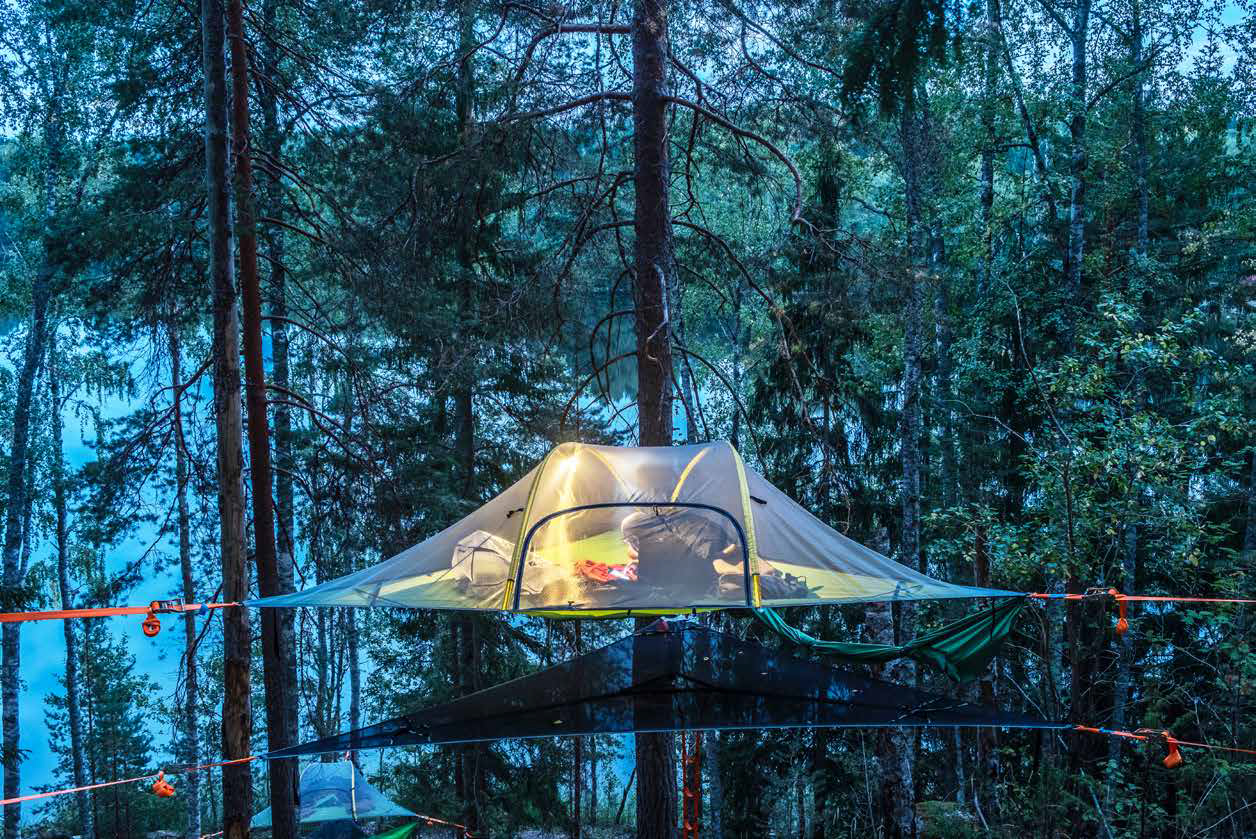 Hanging about: Tentsiles are a camping option on the edge of the Nuuksio National Park.

Temperatures in Lapland can drop to below minus 30 Celsius in winter, but there are various alternatives that allow you to watch the Northern Lights show in warmth and comfort. A popular format for Aurora-spotting accommodations are the glass-roofed igloos at the Golden Crown close to the Levi resort. Their new Suite Igloos even have private outdoor jacuzzis.

While just outside Rovaniemi, the provincial capital of Finnish Lapland, The Arctic TreeHouse Hotel is another luxury option. It’s a collection of rectangular private, en-suite pods of varying sizes ranging from cozy and comfortable to top-notch expansive and luxurious, the northernmost sides of which are broad single windows peering through the pines. 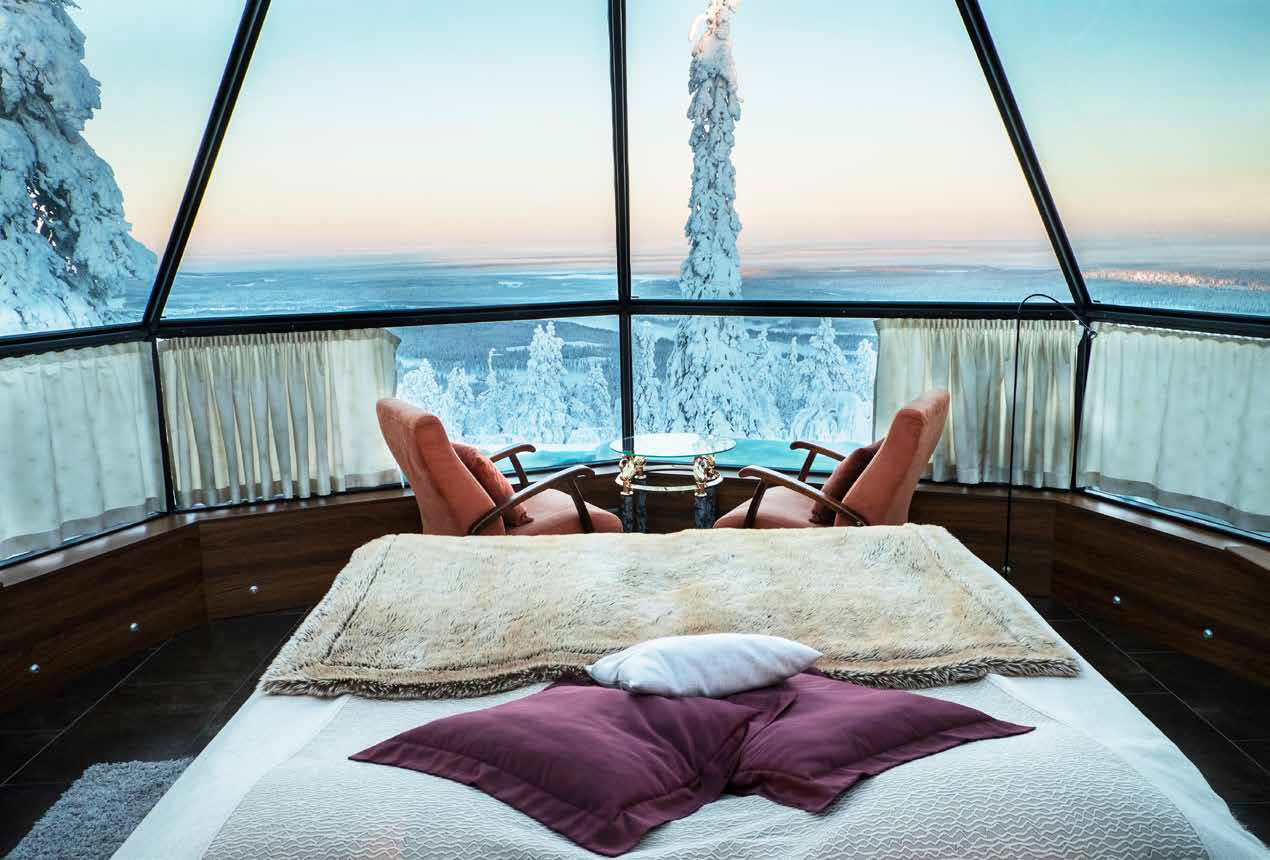 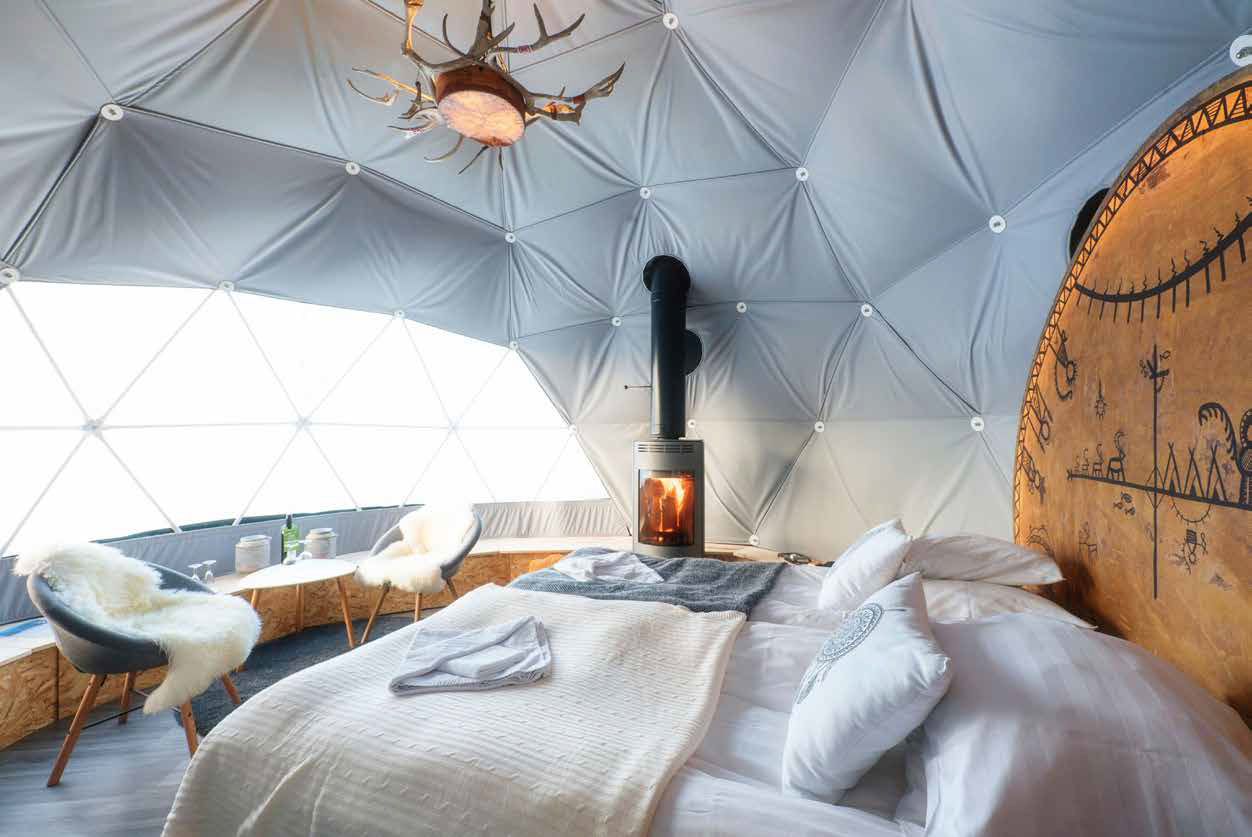 Eight Aurora Domes offer private luxury with the Lapland wilderness on their doorstep.

Auroras on the go

The more adventurous visitor to the North might yearn for something a bit more offbeat and less pampered. “Homeliness” is how Esko Aarnio describes his Mobile Cabin enterprise, whereby guests overnight in humble cabins towed out on to the middle of the enormous icebound Lake Inari.

“The idea came when I was guiding skiing Northern Lights tours on the lake,” Aarnio explains. “I thought it would be great to stay longer and I mused, well why not build a shed to sleep in.”

With the help of his neighbour, Aarnio built the frame that would be easy to move on the snow or ice. “Eventually the cabins started to be more popular and we built a ‘base camp’ cabin where guests can leave their bags and have breakfast in the morning,” says Aarnio. 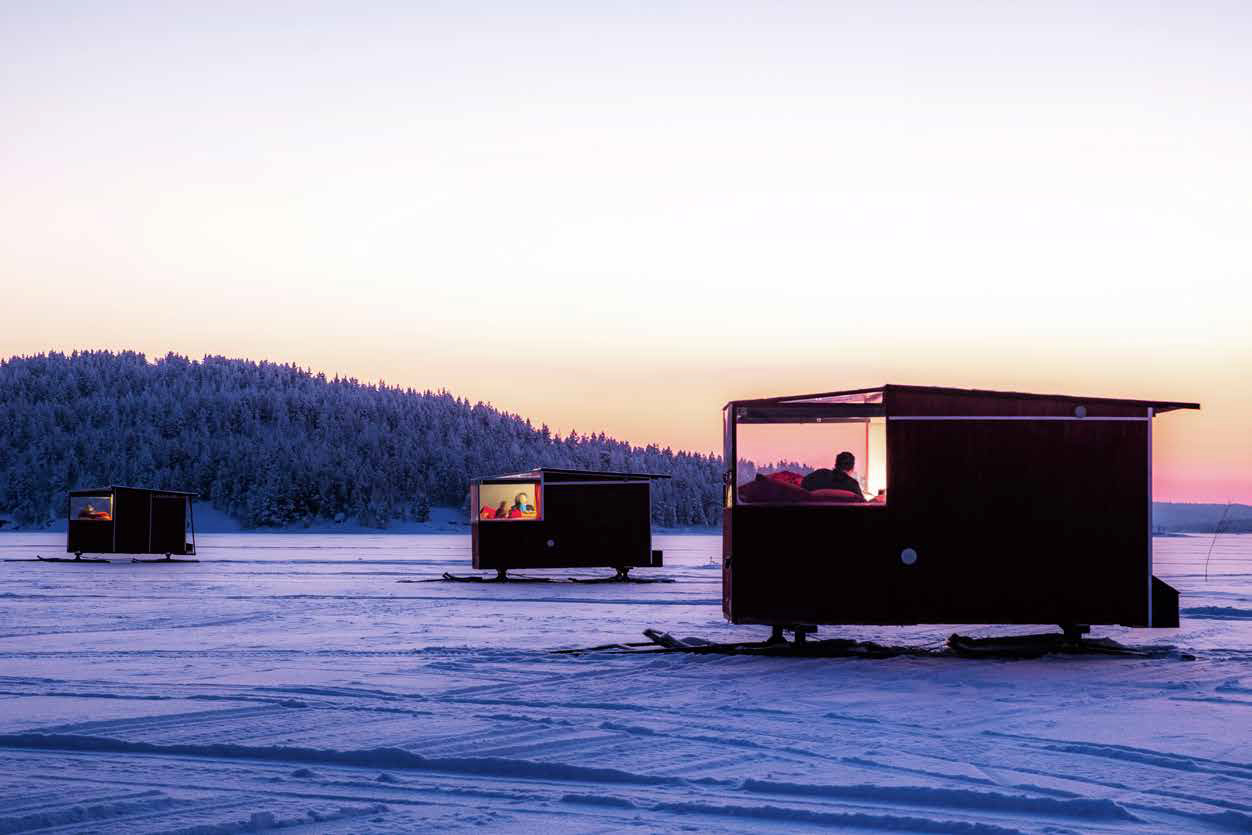 Esko Aarnio’s homely Mobile Cabins are towed out onto the frozen Lake Inari from a cosy base camp.

In the face of all these imaginative alternatives, the traditional idea of glamping in a tent seems relatively unexplored in northern Finland, with the exception of the Aurora Domes offered by Harriniva Hotels and Safaris in Muonio, right on the northern border with Sweden, where the “cleanest air in the world” has been recorded according to the World Health Organisation.

A total of eight lakeside “bubbles” made from strengthened fabric and with north-facing windows have underfloor heating and fireplaces and sumptuous beds, and cute Lapland names like Shaman, Elf, and Reindeer. The idea is to offer secluded, private luxury with nature and wilderness on your doorstep.

Daytrip Helsinki: 3 cool places to visit
Lessons learned from Jukka Kurttila of Finlayson
Where to be in September
Dine at Helsinki’s latest foray into creative cuis...
What’s on in Finland: 6 magical ways to beat winte...
We can’t believe these six quirky saunas