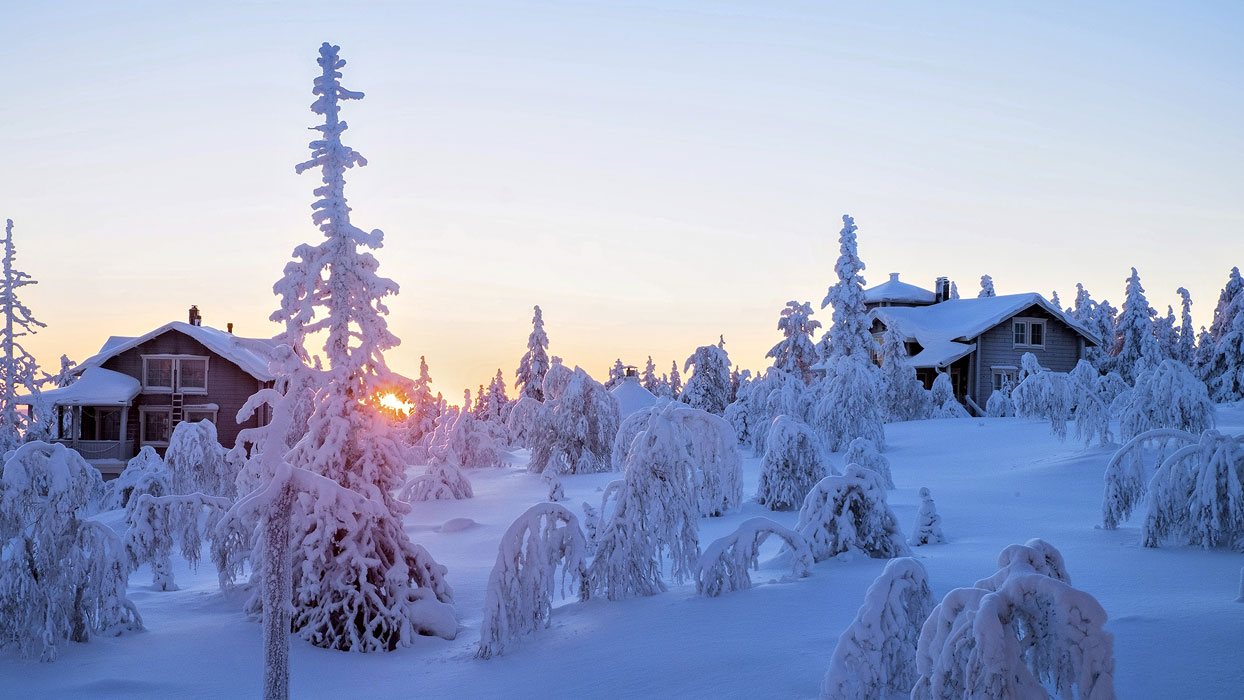 Treat yourself to the Lapp of luxury

From treehouse suites to snug glass igloos, the options for maximum comfort in Finnish Lapland are impressive throughout the year.

For many people, just being in Lapland is a treat. Crouching by an open fire with the aurora borealis or Northern Lights dancing above provides a unique comfort for the soul. Others combine this spiritual wellness with a bit of material indulgence.

“The essence of luxury tourism is to be one step ahead of the customer,” says Janne Honkanen, director of Luxury Action, based in Rovaniemi, the capital of Finnish Lapland. “So Luxury Action was built by the clients, not me.”

Honkanen’s latest coup has been to move Luxury Action’s nerve centre into offices at Rovaniemi Airport, the main international entry point for visitors to Finnish Lapland and almost directly on the Arctic Circle. As long as guests arrive from within the Schengen area, they can head directly to Luxury Action’s own “mini-terminal” before heading off to their destination. In winter, they can change into the best Arctic clothing before being whisked off on snowmobiles or reindeer-driven sleds to their exclusive accommodation.

“On arrival at Rovaniemi, you have your own luxury experience right away,” says Honkanen. “First impressions are everything. You’ll get a welcoming drink and get to know your guide – your ‘hero’ for the trip – and if you don’t have the right clothing we’ll provide it for you.”

All this comes at a premium price, though. A stay in the luxury “Teepee Wilderness Camp” in a tent modelled on a traditional Lapp kota shelter and complete with the services of a gourmet chef, for example, won’t leave you much change from 1,000 euros.

The company’s crew, seemingly infected with Honkanen’s passionate flexibility, accompany guests on exclusive adventures to Svalbard in the Arctic Ocean and onwards to the North Pole. Polar visits, he hints, are extremely pricey and infrequent, but the option is available. 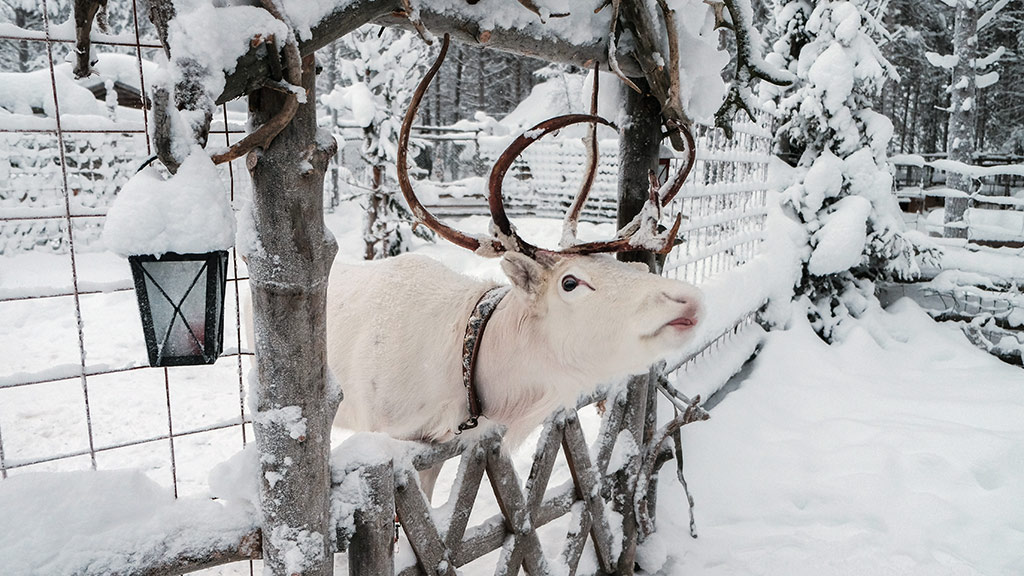 The emergence of top-end travel outfits has raised the bar on travel product services in Lapland overall, coinciding with a steady rise in Arctic Circle tourism. New ideas are hatched with each winter season, such as the Northern Lights ice floating offered by Safartica near Rovaniemi.

One significant response was the recently opened Arctic TreeHouse Hotel in November 2016. This resort consists of individual Arctic TreeHouse suites housed in ingenious wooden cube units, with one side comprised of a panoramic window, and five Arctic Glass Houses. They occupy a forested hillside on the Arctic Circle just outside Rovaniemi, also convenient for arrivals from the airport.

The suites are elegantly fitted in clean Nordic style and designed to provide guests with a clear view of the Northern Lights (when they are putting on a show and the sky is cloudless) and trees hanging heavy with snow in winter. An entire catalogue of activities is available to visitors, from husky and reindeer safaris to dropping in on Santa at the adjacent subterranean SantaPark.

Seven of the 32 suites come with kitchenettes, but the nearby gourmet Rakas Restaurant provides breakfast and other meals. Rakas’s English chef Jonathan Guppy has plans to nurture an herb garden and even bee hives on the roof of the snowflake-shaped restaurant during the summer months.

“We define luxury as being able to do your own activities in your own time, when you want to, and with the best possible 24-hour service,” says Ilkka Länkinen, CEO of the umbrella company that runs both the new hotel and SantaPark. “Our catering is also important. If you go fishing and you catch something nice, the chef will cook it for you.”

Länkinen, in partnership with his wife Katja, also owns the lakeside Metsäkyly sauna and spa and Joulukka Christmas-themed restaurant near Rovaniemi, offered as features under his Lapland Luxury brand. Seclusion and privacy are key elements, and visitors are free to splash around in the Jacuzzis and take post-sauna dips in the lake to their undisturbed hearts’ content. 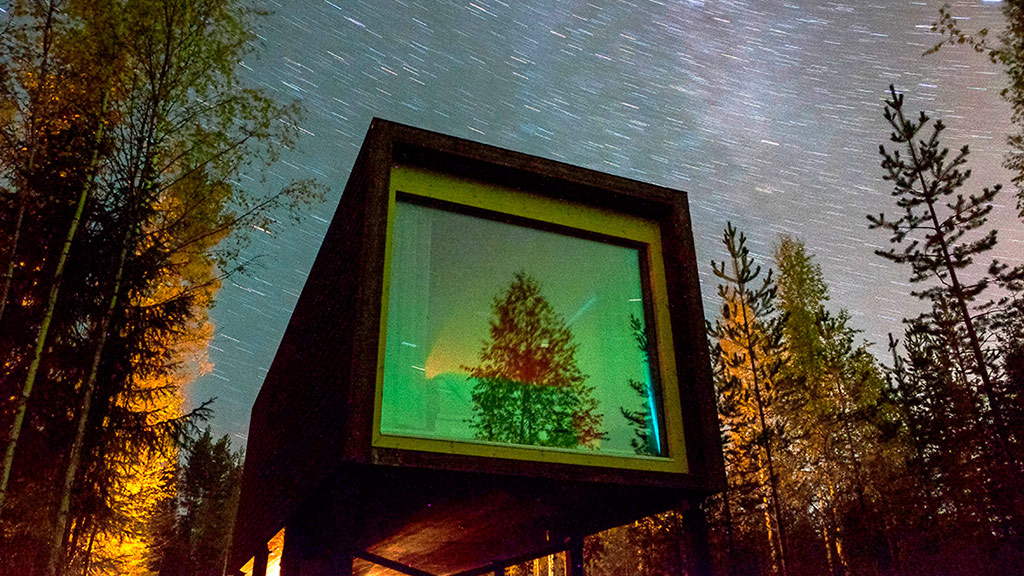 Meanwhile, back in Rovaniemi, the opening of the Arctic Light Hotel in 2015 filled at least part of a gap for five-star hospitality in the main tourism gateway to Finnish Lapland. Apart from its plush Arctic Boulevard Restaurant & Lounge and lighting designed to replicate the stars of the clear Arctic sky, the hotel’s assets include head concierge Suha Yesilyurt.

Yesilyurt makes the plausible claim to be the “most northerly concierge on the planet” and has earned the prestigious Les Clefs d’Or – golden keys – recognition as such.

In response to growing interest in Northern Lights tourism, glass-roof igloos of varying degrees of comfort now cluster like space capsules in forest clearings throughout the north. At the top end are the snugly heated and furnished transparent nests provided by Golden Crown overlooking the valley near the ski resort of Levi at Utsuvaara.

Igloos at the Golden Crown resort near Levi.

Half cabin, half igloo

Jussi Eiramo opened his tiny turf-hut restaurant in 1973 at Kakslauttanen, some 250 kilometres north of Rovaniemi and handily located a 30-minute drive from Ivalo airport. He can’t have imagined that his Arctic resort would now span two separate villages, East and West, of cabins, igloos, restaurants, husky, horse, and reindeer farms, and Christmas attractions.

Kakslauttanen’s newer West Village is growing with the addition of inventive Kelo-Glass Igloos, combining traditional and modern comforts of the pinewood log cabin with north-facing semi-igloos for aurora viewing. The cabins include saunas, open fireplaces, and kitchenettes, so privacy is assured. Back in the original East Village, Eiramo offers lavishly-fitted queen suite cabins, complete with Jacuzzis and swanky four poster beds.

“We get visitors from 60 different countries, including China, Singapore, Japan, and India, so I’m happy I didn’t focus on any one single market,” he says, adding that the resort is open year-round except for the month of May. At other times, Kakslauttanen can be a good base for outdoor activities, from hiking to river-rafting and even gold panning.

Dining in icy style at the Snow Village and Hotel near Kittilä.

Here are three of the hottest cold spots in northern Finland, open from mid-December until late March, or until the structures are reduced to spring puddles.

Snow Village and Snow Hotel, 25 minutes from Kittilä, has a log restaurant as well as an exotic ice restaurant in addition to spectacularly illuminated corridors of ice and ice furniture.  snowvillage.fi

Arctic SnowHotel is 26 kilometres from Rovaniemi city centre on Lake Lehtojärvi. A beautiful wonderland of ice sculptures including an ice bar, snow sauna, and honeymoon snow suites, with en-suite glass igloos an alternative for relaxed and heated aurora viewing.  arcticsnowhotel.fi

Kemi SnowCastle is on the northern shore of the Gulf of Bothnia and one of the longest established seasonal hotels at which to thrill with the chill. A night spent exploring the magical decorations and SnowChapel can be followed up with a Baltic icebreaker cruise from nearby Kemi. visitkemi.fi/en/snowcastle 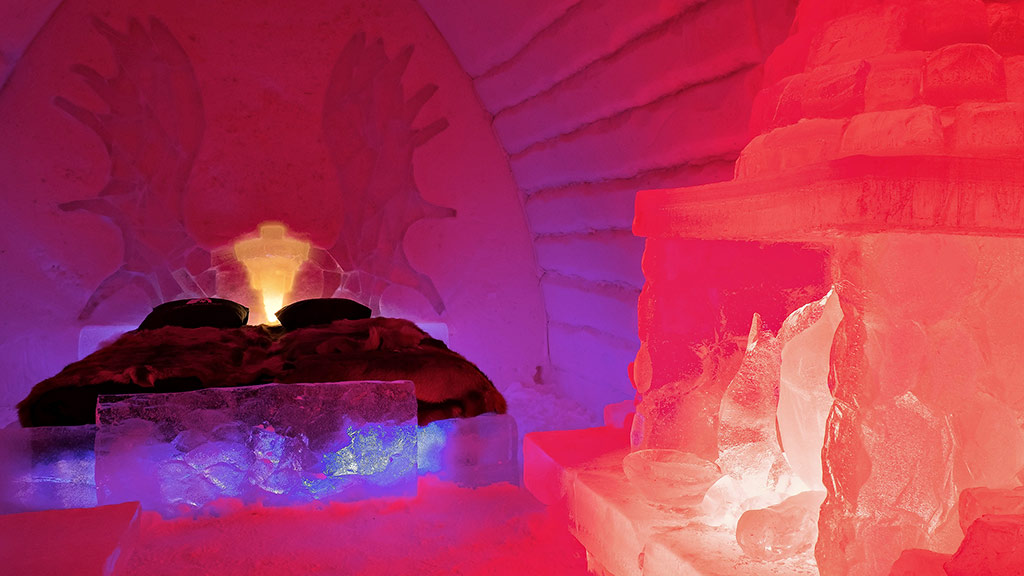 Ice is nice in a suite at the Arctic SnowHotel.

Experience the art of Arctic floating
Take two and visit the reel Lapland
Top three winter pop-up igloos in NYC
We can’t believe these six quirky saunas
Discover the stars Lapland style
What’s it like to chase the Northern Lights?