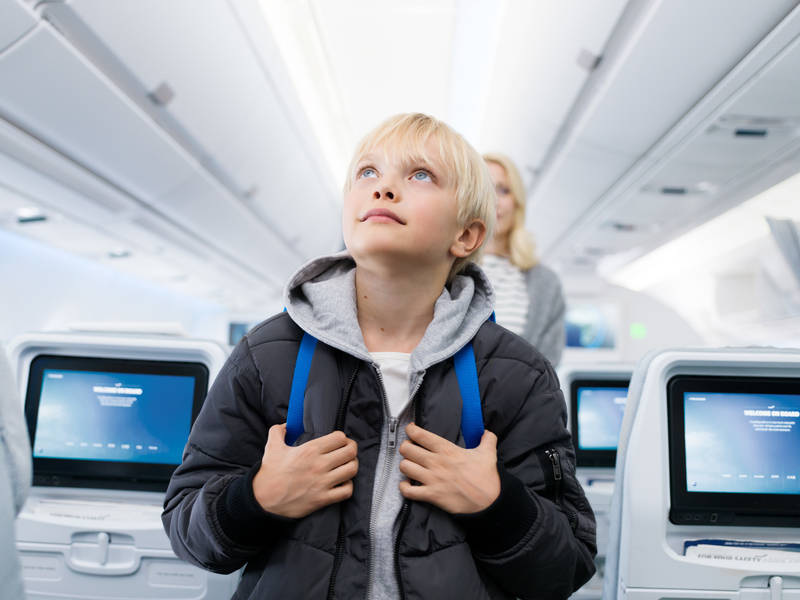 Make your flight a treasure hunt for children

Travelling is full of wonders. What if you made the time fly for the smallest family members with a little treasure hunt?

We collected these tips for creating a treasure hunt for kids from our cabin crew and pilots. You can start your treasure hunt already at the airport and continue during the flight.

Collect your own magic ticket

When you start your journey at Helsinki Airport, you can begin your treasure hunt by collecting a Moomin magic ticket from our Special Assistance Desk or from one of our ground crew members in the airport departure hall. Then find your way to the boarding gate with your magic ticket and make notes on what you saw on the way. Did you, for example, meet our pilots, spot many aircraft or bump into a dog or a cat travelling?

For aircraft enthusiasts, airports obviously are an eternal source of inspiration. Did you know that an especially good place to spot aircraft at Helsinki Airport is between the boarding gates 28 and 29? Wide windows to the airport apron allow you to see aircraft of many kinds at the same time.

Play your time away

Many airports have hidden gems for children. At Helsinki Airport, you can, for example, navigate to gate 16 to find a play area with lots of fun things to do.

If you are heading to a flight from the non-Schengen side of Helsinki Airport, go and visit the new Aukio. You can wonder the changing Finnish landscapes on 360 LED screens, or even better, try your own art with lights on the interactive wall.

Have you ever thought that above the skies you have a front-row seat for spotting wonders of nature?

If you are lucky, you can catch the northern lights in action during your flight. The more north you fly, the better your chances are to witness this magical moment. You can spot northern lights all year round, but they are more common during autumn and springtime. Gazing through the window pays off especially during clear, dark nights when the northern lights are most likely to be seen.

See the wings change their shape

Have you seen the wings of an aircraft to change their shape during the flight? The shape of the wings changes when preparing for take-off and landing. With opening the flaps and slats of the wing, we can improve the aircraft’s ability to fly slowly when taking off or landing. If you are counting minutes to the landing, you can check the shape of the wings. When the flaps and slats are open already, the landing will happen very soon.