Food for thought: what we’ll eat in the future

Lauri Reuter, biotechnologist and founder of the Nordic’s first food tech venture capital fund, has some ideas on the future of food.

If you’re hungry to know what food production and consumption is going to look like in the (very near) future, Lauri Reuter is definitely the right ­person to ask. An expert in the future of food, Reuter has a PhD in ­biotechnology and previously worked as a scientist and ­strategist at the VTT ­Technical Research Centre of ­Finland. Now he’s one of the ­founders of the newly launched ­Nordic FoodTech VC – the region’s first venture capital fund focused solely on food tech startups.

“How we eat today is a recipe for apocalypse,” Reuter says. “We are literally eating the planet and killing ourselves in the process.” If we don’t change, he says, “we’re screwed.”

So what’s wrong with the current food system? For starters, climate change and the threat it poses to global food production. Climate change is already causing things like heat waves, droughts, flooding, and bigger and more frequent storms, all of which impact ­agriculture and crop production. “And it’s only going to get worse,” Reuter says. In the future, much of the land that’s farmed today might become unfarmable.

Then there’s the loss of biodiversity caused by land use for farming and over-fishing the oceans. “It’s not just about cute animals going extinct,” Reuter says. Food production is built on a diverse ecosystem of animals, insects, plants, oceans, and more. When they’re under threat, we all are. If the consumption of food continues like this, we will likely need to roughly double production by 2050. And without consuming the planet in the process.

“We are literally eating the planet and killing ourselves in the process.”

Plus, Reuter says, “We’re literally eating ourselves to death.” Globally, every fifth death can now be traced back to bad diet. The proof, he says, is in exploding rates of cancer, diabetes, cardiovascular, and other diet-related diseases.

What needs to change? We definitely need to move towards more plant-based diets, resource-efficient food production, create completely new sources of food, and find ways to support healthier eating. But that’s not all.

“The biggest problem in the entire food chain is that the consumption decisions we make are overwhelmingly irrational.” Why? Because they’re made by humans.

“We have more data and knowledge than ever before about what we should and should not be eating, but that all goes out the window when you walk into the supermarket hungry, tired, and with a couple of kids in tow,” he says.

The food industry is the least digitalised industry on the planet and it’s ripe (pun intended) for disruption. Right now, the main user interface we have with food are supermarkets and restaurants. That will change, Reuter says, when we move from a retail-centric to a genuinely user-centric system.

Enter “food as a service.”

There are already lots of personalised nutrition apps out there that try to do things like analyse your DNA and tell you what you should be eating based on your unique genetic makeup. But what will be really interesting, Reuter says, is when services like that mature and become way more integrated into online food retailers. 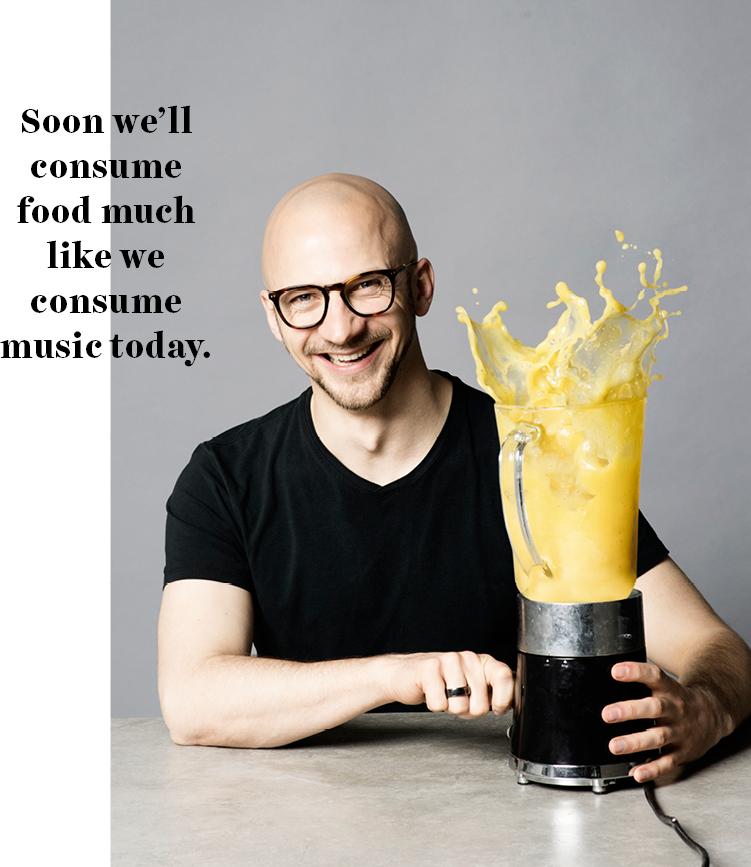 So instead of getting recommendations you need to act on, you’ll subscribe to a service and be able to use filters to set the carbon footprint you’re comfortable with, your personal dietary needs, allergies, and more.

Soon we’ll consume food much like we consume music today. Your food service provider will use algorithms to learn to know what foods you need and like just like Spotify learns to make you curated playlists. You’ll no longer have to worry about stuffing yourself at lunch because a robot will use AI to put together your own personalised meal at the office canteen. And those tiresome trips to the supermarket will be a thing of the past because Alexa will have dinner delivered to your house before your stomach even tells your brain that you’re hungry.

If all of this sounds far off in the future, think again. “There are new players and technologies out there already creating the biggest change the food system has ever seen,” Reuter says. And that’s exactly why he and his three partners launched the Nordic FoodTech VC, a fund focused solely on helping companies to pioneer new food-related innovations.

In addition to solving the massive problems related to food and the environment, Reuter is excited about the new technologies and services that will free us from having to make all those difficult rational decisions. “It’s such an obvious weak link to fix,” he says. “And what keeps me so optimistic is that what’s healthy for us is also healthy for the environment and good for society as whole,” he says. “Radical change in food just makes sense.”

My ultimate meal Fish from a lake, potatoes and herbs from a garden, and berries from the Nordic forests. It’s a rare treat.

What I’ve learned When you think all has been invented, you are looking in the wrong direction.

My biggest passion Securing future-proof healthy food on this planet – and the next one.

How I see the future Wise use of new technology can build a surprisingly bright future.

My ultimate meal Fish from a lake, potatoes and herbs from a garden, and berries from the Nordic forests. It’s a rare treat.

What I’ve learned When you think all has been invented, you are looking in the wrong direction.

My biggest passion Securing future-proof healthy food on this planet – and the next one.

How I see the future Wise use of new technology can build a surprisingly bright future.