What’s the first place that pops into your mind when you think about fashion? Paris? Milan? Well, you might want to add Helsinki to that list.

Each season, the Fondazione Pitti Discovery turns its spotlight on the brightest new stars in men’s fashion, and now it’s Finland’s time to shine. Eight Finnish labels showed at the January edition of Pitti Uomo, a semi-annual menswear trade show held in Florence, Italy, as part of the event’s Guest Nation programme.

We showcase three of the eight designers and ask what Finnish influences they brought to Italy.

Founded in 2012 by Niina and Timo Leskelä, Nomen Nescio is a brand built largely on anonymity. As the label’s name implies, the designs are made for – and in some ways by – an unknown and unspecified person. 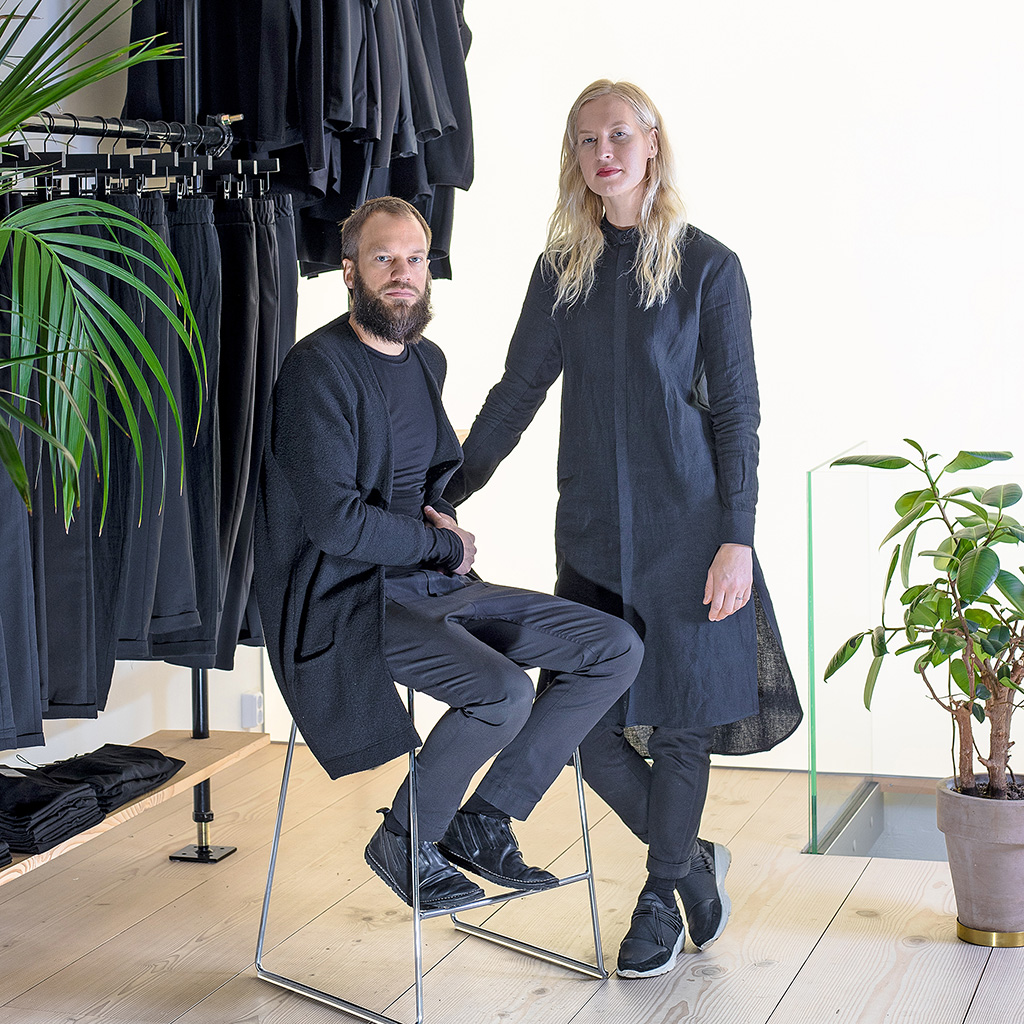 Niina and Timo Leskelä’s ultra-minimalistic clothes are made for men and women.

Every piece in every collection is black, and their design concept can be summed up in one word: minimalism. For the Leskeläs, that aesthetic isn’t just a style choice, it’s also a natural extension of who they are as people.

“We’re both introverts and we don’t enjoy being in the spotlight. That’s also a very Finnish thing,” Timo Leskelä says. And they mean it.

For the first three years after launching the label, the couple was like the Bansky of fashion – no one actually even knew who was designing the clothes.

Originally a menswear label, Nomen Nescio’s clothes are so minimalistic that they’ve always appealed to women, too. “Finland is super democratic, and it was the first country in Europe to give women the vote, so it’s natural for people here to see that the same piece can work just as well for a man or a woman,” says Niina Leskelä.

As Nomen Nescio takes its anonymous, unisex, and ultra-minimalist collection to Pitti, their goal is clear. “We’re not trying to woo anyone. Not everyone gets what we’re about. But the people who do will find us.”

While they acknowledge that it’s a lot easier to get attention at Pitti with “bells and whistles,” Nomen Nescio is hoping to make a strong, silent statement even without them.

Who would you like to dress? Banksy
Dream collaboration The minimalist sculptor Richard Serra.
Who do you design for? You, me, and anyone who likes to keep it simple.

Rolf Ekroth’s life changed four years ago when he enrolled in a sewing class. After years struggling with jobs in sales, social work, and even professional poker, the Helsinki-based designer finally found his calling.

Ekroth bought a sewing kit and took the train from Helsinki to the class in a gritty part of neighbouring Vantaa. “For the first few months I had no idea who the teacher even was. All of the other students were grannies, but they all taught me to sew.” The rest, as they say, is history. 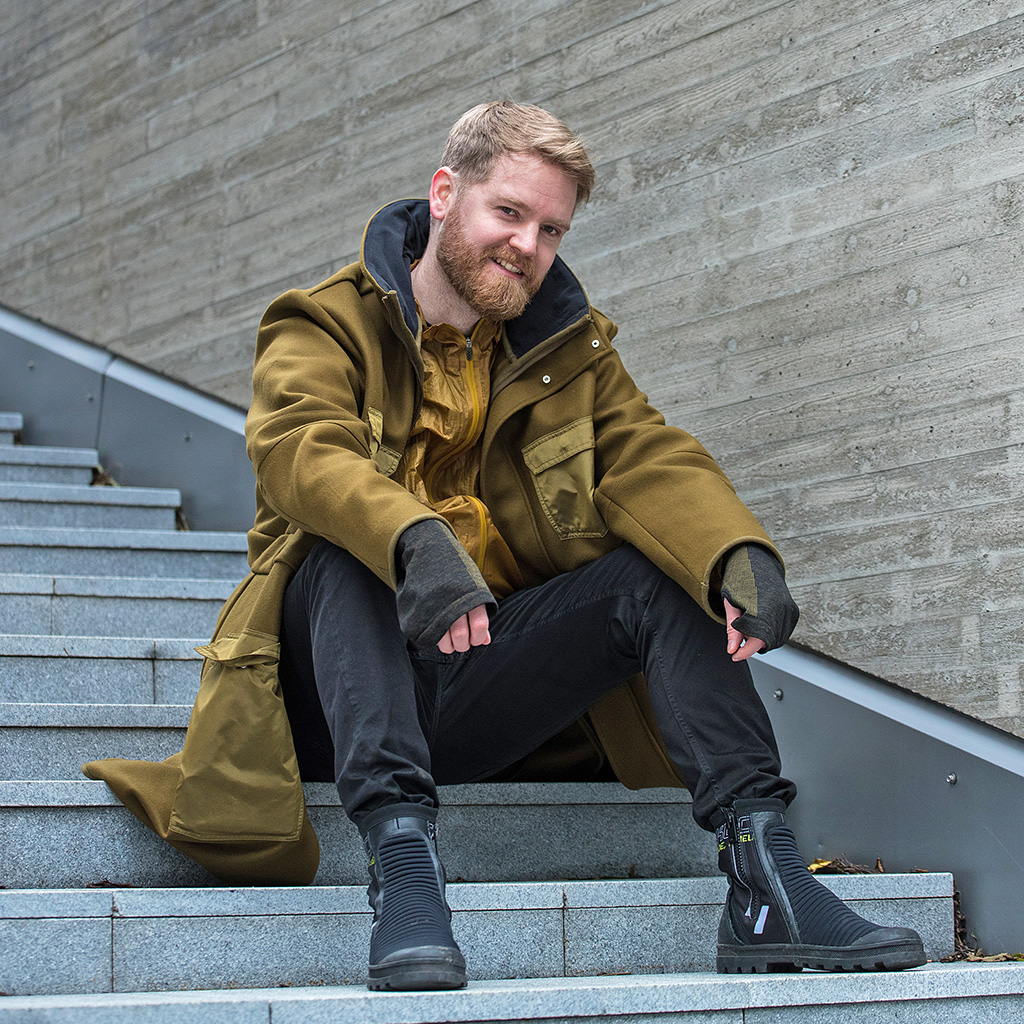 Rolf Ekroth takes a new kind of Finnish streetwear to the Pitti Uomo event in Florence.

Ekroth ultimately made his way to the Aalto University School of Arts, where he quickly started making a name for himself. In 2016, he was a finalist in the prestigious Hyères Fashion Festival in France. That led to a capsule collection for Galeries Lafayette in Paris. And now, Pitti, where he’ll show an athletics-inspired collection created for the Finnish outdoor label, Halti.

Ekroth’s aesthetic has always been inspired by sports and streetwear. The inspiration for the Halti collection comes from a Helly Hansen jacket Ekroth borrowed from his father while sailing in the Finnish archipelago as a teenager.

“I saw the same exact jacket in a Wu Tang Clan video later and that came back to me when I was designing this collection,” says Ekroth.

While Finland doesn’t exactly have a reputation as a global fashion hub, especially when it comes to menswear, Finns do often refer to themselves as the “shellsuit nation” (tuulipukukansa). So, as he heads to Florence, Ekroth is set to take that title to the next level.

Who would you like to dress? Jay-Z, Chance the Rapper, Kendrick Lamar, and A$Ap Rocky. Another designer wearing my clothes would be the ultimate compliment.
Dream collaboration A sneaker line with Adidas, Nike, Reebok, or New Balance.
Who do you design for? I think most designers design what they’d wear.

Heikki Salonen is one of Finland’s most successful designers in recent years. He has been head designer at the womenswear powerhouses Erdem and Diesel Female, and he currently holds the same position at MM6 Maison Margiela. At Pitti, Salonen will be showing his first menswear collection under the label Vyner Articles. He calls it “ArtWorkWear for 2018.”

Salonen describes himself as a designer whose job is solving problems. “Fashion isn’t just for fashion people, especially in Finland.” 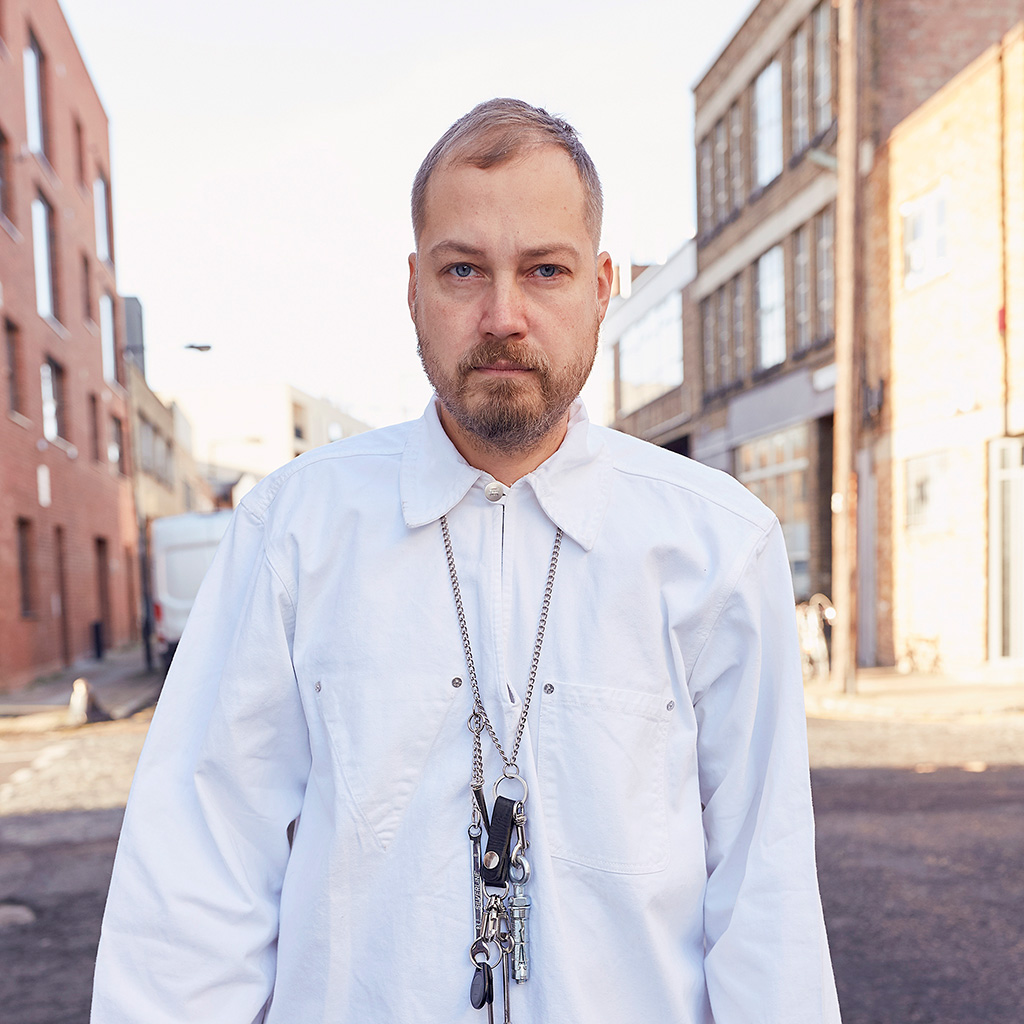 Finland was far from a hotbed of fashion in the ’80s and early ’90s, when Salonen was a teenager. If you wanted to know what people were wearing outside of Helsinki, you basically had two choices.

“You either went to the magazine section at the department store or you took the ferry to Stockholm.” Salonen did both. But the geographical and cultural disconnect between Helsinki and fashion capitals like Paris, London, and New York also had its good side.

“There was a lot of misinterpretation of what was happening in fashion based on your imagination and what you’d seen in magazines,” says Salonen.

As he heads to Pitti, Salonen is excited to show the Vyner Articles collection, which has been described as “workwear for creative and other child-minded people.” But he’s staying grounded.

“At the end of the day, it’s clothing and that’s it. If it makes you have more fun when you’re out dancing or if it makes you feel more creative, I’ve done my job.”

Who would you like to dress? Sadly, Tove Jansson is no longer with us, but I would love to dress her. David Lynch would be nice, too.
Dream collaboration I’d love to do a movie where I could create a whole world – like The Matrix, Blue Velvet, or Clockwork Orange.
Who do you design for? People in creative industries. I really want to make clothing that fosters their creativity.