In the summer of 1969, as the Americans were landing on the moon, Finnair was staking out new territory: the Atlantic crossing. Now 50 years later, we look back at this great leap forward.

The launch of the Helsinki to New York route was preceded by monumental preparation. Finnair wanted to arrive in style and to make a lasting impression. Finnair also wanted to show what being Finnish represents, including design, style, and service. And acclaimed Finnish designers were employed to create the display. Something unparalleled in the airline world had begun.

The first aircraft were named after Jean Sibelius and Paavo Nurmi. One carried Finland to the world on wings of song, and the other was a legendary runner, also known as the Flying Finn. The aircraft tails were painted with graceful blue and white Finnish flags. 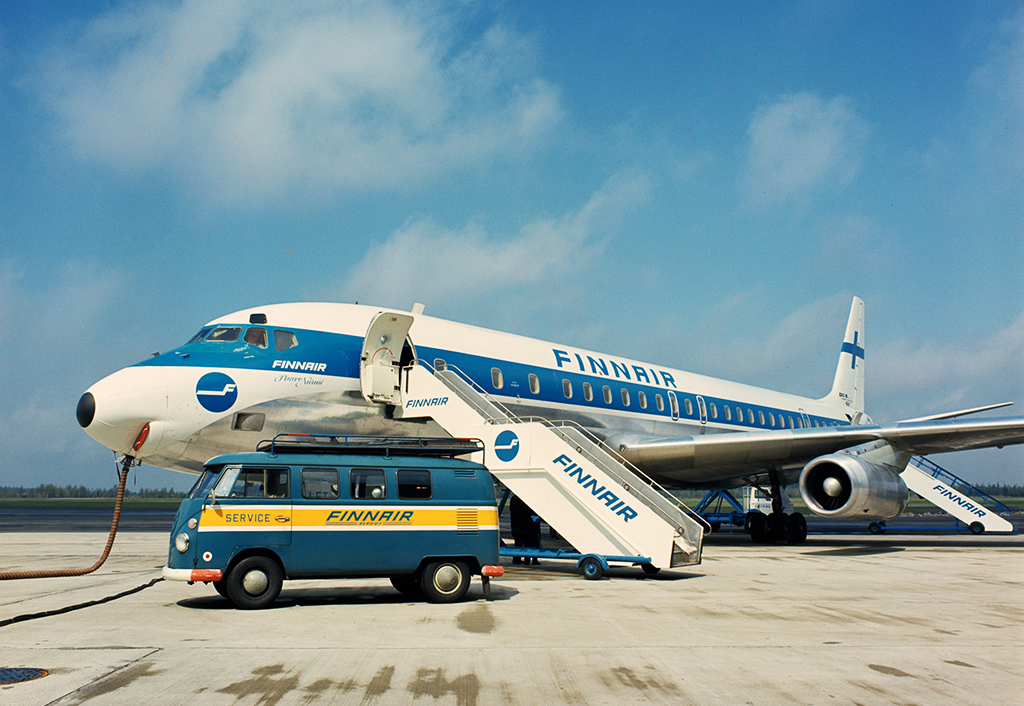 This Douglas CD-8 was named after Paavo Nurmi, the Flying Finn.

Space travel was the theme of the age. Finnair’s new aircraft type, the Douglas DC-8, represented the height of aviation technology. The aircraft had a revolutionary navigation system, similar to that of the spacecraft that took Neil Armstrong and the first astronauts to the moon. The aircraft was described as “the million dollar brain.”

Finland’s top talent was consulted for the interior design of the aircraft and an expansive service upgrade was implemented. The crew’s uniforms were designed in the spirit of the Space Age, the interior colour scheme was transformed, bars and social spaces were introduced into First Class, and dining services were Finnish design at its very best.

Cabin tables could not have been laid out more splendidly. In the days of first-class affluence, no corners were cut in the catering programme. Everything from service to settings was top of the line. Black Beluga caviar and chilled Finlandia Vodka kick-started transatlantic luncheons. For years caviar was lavishly ladled out of huge bowls for the enjoyment of travellers. 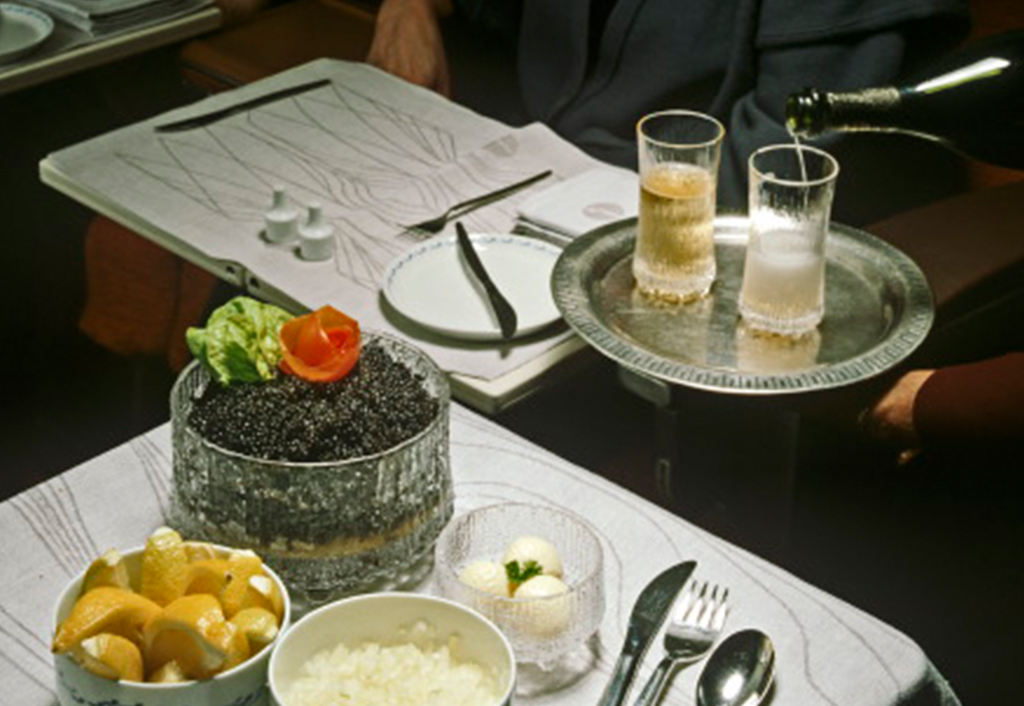 Designer Tapio Wirkkala  was entrusted with the comprehensive planning of the dining service, while glass, porcelain, and metal were given new forms. The table linens were created by Dora Jung and they featured a circular pattern familiar from the days of wooden aircraft propellers.

Wirkkala’s glassware, the now classic Ultima Thule, was produced by Iittala and introduced on Finnair’s New York route. It became so popular, that it was soon available in department stores and has remained a favourite item of Finnish design.

Wirkkala also designed novel cutlery for the flights, with knives that resembled quill pens. The pieces were admired so much that they began to vanish by the thousands, a volume impossible to replace and a switch to a more mundane model was made.

A modern rectangle suited the contours of the new coffee cups. Wirkkala’s porcelain is still in use at Finnair, displaying a blue decorative motif circling the plate brim, with bevies of Finnair logos taking wing. 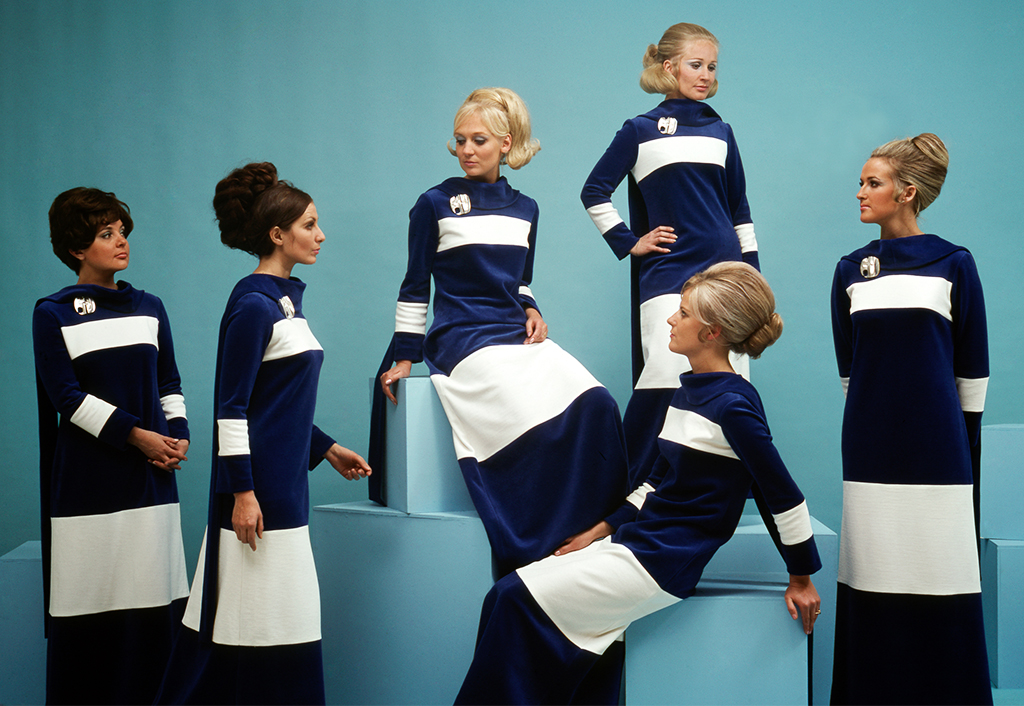 Finn Hostesses were recognised by their full-length dress.

Specially trained Finn Hostesses worked on these flights by charming passengers in the cabin, and wearing new designer uniforms every year. While other crew members were responsible for service, their job was to offer individual service from offering information on Finland to foreign visitors to entertaining and conversing with customers. Their long dresses were adorned with the first in Björn Weckström’s series of outer-space silver accessories that exemplified the spirit of that age. Designer Kari Lepistö created a silver outfit, displaying the space travel theme.

All this was topped with winter head wear made of sapphire mink. Finnair wanted to arrive in style, and no effort was spared to achieve that effect.

P.S.: Among the first passengers on the route was Finnish President Urho Kekkonen. The Helsinki to New York route was new, the DC-8 Finnair’s pride, and the versatile bun the favoured hair style. According to stories, the president made his way to the First Class bar. To the horror of the cabin crew, he found a hair pin on the bar, scrutinised it, and remarked: “Well, this certainly did not fall from my head!”

This post was first published when the New York route celebrated its 40th birthday in 2009. The text is originally written by Senja Larsen.